Thanks to Ann for her comment and the mention on Painters Table. I don’t write for such but it is nice to have the recognition, it is much akin to how we or I make art, you or I hope that someone connects to what we are saying and we can have a dialogue or at least a viewer who completes the circuit.

When I mentioned in one of my De Kooning posts about being part of the soup that voice helps. I remember as a younger lad, someone telling Baudelaire, if memory serves me, in a moment of crisis he wondered why should he write. The response was, someone out in the provinces who is all alone reads you and feels no longer alone.

I have a ton of graphic design magazines that I look over and I ran across a comment in an old, 1960ish design thing about an artist. Art is about commune, about the communal. We don’t live in a literal cave but sometimes a metaphorical one and we seek to say something that makes and allows us to connect, connect to a deeper feeling about our lives and our world as humans in a very basic and sometimes banal way. But that banality if I can call it that is very important.

On motif-
One of the things I remember reading many years ago in one of my Richter’s writings and I believe I mentioned it in one of my earlier blog postings was, it isn’t how to paint but what to paint.

A few of my fellows meet once every few months to argue and discuss art, a kind of informal salon. The most recent one involved a heated argument over the Renaissance and the concept of self. I was lucky enough to see the Caravaggio show in London some years ago and I wished I could paint with that kind of fervor and belief in a subject.

We don’t have that subject.

I recently finished Joseph Leo Koerner’s “The Reformation of the Image” and am now finishing Leo Steinberg’s “The Sexuality of Christ in Renaissance Art and in Modern Oblivion”. These are two very important books in my opinion.

Art and the images they portray or don’t portray are important, in fact are of utmost importance in my opinion.

To make a painting means something. Watching the Richter film was akin to that. I was happy to hear that how he feels about his work, in process, is similar if not exactly like how I feel. Painting is a visual language that is independent but somewhat subscribed to verbal language. I am lucky in that I have a few artists who I can have the most seemingly hermetic conversations one could imagine having about the most arcane minutia one could imagine.

I made a conscious decision given when I was more active in the “art world” to make a kind of gestural abstraction, I still do. This was in the early 90’s. Not one that was related to David Reed or Stephen Ellis but one that was even more raw, disgusting and primeval. Arthur Danto remarked once upon seeing two of my works that they were like the paintings a cave man would make if he made abstract art. He said this in the pejorative and with David Reed by his side.

Trying to paint a figure in a perspective space knowing what I know about the history of images and the fact that perspective in itself is a cultural condition is about as relevant as painting a Barnett Newman or Agnes Martin. They are both non-starters.

I can and do appreciate, love and admire those works but the door is closed and I have to figure out as an image maker what is important to me. Not something that answers to the long or recent past, but something that answers to my own anxieties about making images and the necessity despite my usual desires to do so, to find a way that answers to my experience, that at the very least makes it the proposition to a door that I seek. To another way of thinking and seeing, one that maintains the mystery and Wow moment that says, well Wow frankly. One that surprises even me.

With that said and trying to maintain a semblance of anonymity, here is one of my more recent works that I am happy with being naked.

By the way it is 6 feet by 5 feet for those who might want to know. 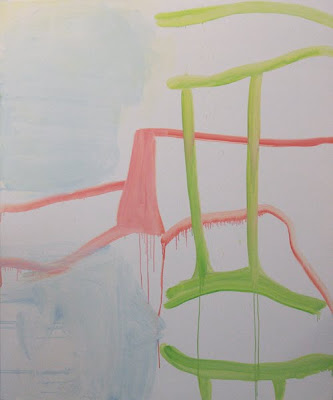 Dennis Bellone
formerly D Richmond the doppelgänger for an artist based in NY.